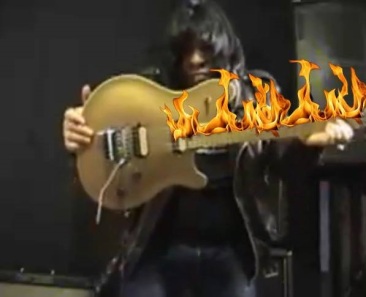 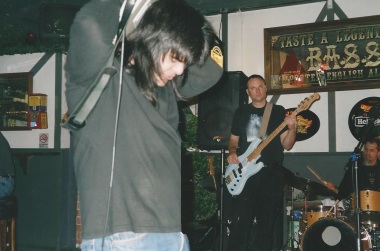 The story starts with a trumpet player named Louis Armstrong.  Armstrong is in the Smithsonian Institute for creating the format which would be followed by the “Guitar Slinger” for decades to follow.  What was his invention?

He was the first to establish the songwriting style which began with two verses, a chorus, a solo, a third verse, a chorus then an end. 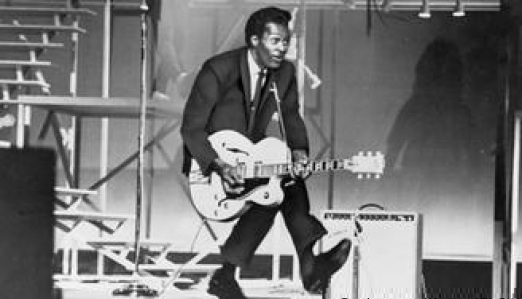 Perhaps the first true “Guitar Slinger” was Chuck Berry.  His hit song Johnny B. Goode was one of his 27 hits in which the Father of Rock and Roll would open with a signature guitar solo then sing two verses, a chorus, then perform a guitar solo, then a final verse and end on a finishing solo (often called the outro).

The original Guitar Slinger who may or may not be the creator of the discipline was a young blues singer named Robert Johnson.  His 29 songs became material for Early Rock bands who had not yet become comfortable in recording original music.  Many of these songs still exist today.  Songs that have no known writer such as the Blues standard “Boot Hill”.  (Last made famous by Stevie Ray Vaughn)

In the early days of Rock and Roll, before Classic Rock, before the Beatles, before progressive rock, punk rock, new wave and pop rock, (etc.…) There existed only one sound in the genre of Rock and Roll.  It was “Roots Rock” which we often refer to today as “Rockabilly”.   Rock music at the time was personified by artists like Chuck Berry, Little Richard, Elvis Presley (AKA: The King of Rock and Roll) and more importantly Buddy Holley known as Buddy Holly.  The spelling of his last name was a clerical error that was never corrected. Although Buddy Holly’s importance is not derived from his guitar prowess; he is historically important as being the first musician to create a major paradigm shift in pop music.  Holly composed, recorded, produced and performed his own music.  Elvis sang songs that were written by songwriters, produced by men like Sam Phillips and the King was often accompanied by studio musicians with various backgrounds.  Although The King was always seen with a guitar around his neck, he does not meet the prerequisites as a “Guitar Slinger”.

The guitar slinger is known more for his prowess as a guitarist first then as a lead singer.  Even though one of the greatest singers of our time played a Fender Telecaster on “Crazy Little Thing Called Love”, Freddy Mercury also does not meet the prerequisites as a “Guitar slinger”.  Early guitar Slingers like Chuck Berry were known for their guitar solos as well as the songs they wrote and sang.

The Day the Music Died

1959 – 1960 was a bad year for the Guitar Slinger.  Rock music lost both Buddy Holly (That’ll be the day) and the young up and coming, Ritchie Valens (“La Bamba”, “Come on Let’s go”) in a plane that crashed shortly after takeoff in a cornfield in Clearwater IA.  Then in 1960 a young rocker from Minnesota named Eddie Cochrane (Summertime blues) would die in an automobile accident in England.
Between 1959 and 1963 the only Guitar Slinger still making music was Chuck Berry.  Sadly, “Race” Music had not been fully accepted as main stream entertainment by the world.  Players like Chuck Berry and Little Richard would be confined to the “Chitterling” circuit.  Their music was being covered by socially acceptable Caucasian entertainers like “Pat Boone”.

Various Elvis manifestations would be force fed to the youth of America when Elvis enlisted in the U.S. Army in 1958.  Hollywood saw this new genre of Rock and Roll as “musical sex”.  The default formula for Hollywood when a drought of Rock talent would arise would be to find a harmless pretty boy and put a guitar in his hands.  (Playing was optional).  Among these pretty boys that arose after the loss of Buddy and Ritchie was Ricky Nelson.  Ricky Nelson was the product of an early 60’s television show called Ozzie and Harriet.  The band Queen would go on to perform “Mary Lou” up until Freddie Mercury’s death in 1991.

It wasn’t until the British Invasion during the mid-sixties that we saw the Guitar Slinger make young kids want to do more than strum chords on their guitars.  As fate would have it; Elvis Presley’s manager Tom Parker had a fear of flying.  This phobia gave a huge advantage to Buddy Holly and his band the Crickets.  Holly, Cochrane and Gene Vincent did tour the U.K. transforming British pub bands that were playing a “blue grass” style of music called “Skiffle” to American rock music.

The “Crickets” spawned English bands with similar names such as the “Beatles”.   The absence of Elvis in England can explain why England produced the most “Bands” while the U.S. produced the most “Solo Artists”.  The Guitar Slingers that would blossom from an English band, would often relocate to the U.S. and enjoy a career as a “Solo Artist”. Guitarists that could sing, like Eric Clapton and Peter Frampton would eventually leave their bands and come to the States to enhance their careers as “Guitar Slingers”. However; the true Guitar Slinger has been mainly an American character due to the origin of Blues or Rhythm and Blues music.  Again, it all goes back to Robert Johnson.

One U.K. band did back an amazing Guitar Slinger by the name of Alvin Lee.  Alvin Lee was the front man for the U.K. band “Ten Years After”.  Alvin Lee was Chuck Berry on steroids in a Ferrari.  Many will remember Ten Years After as the band that stole the show at Woodstock.  Lee would share the stage at Woodstock with one of the greatest Guitar Slingers to touch 6 strings.  A young up and coming guitarist who got his start with Little Richard named Jimi Hendrix closed out Woodstock but it was two years earlier in Monterey California that Jimi Hendrix would be re-introduced to America.

One of the first major outdoor festivals that made Rock Music main stream entertainment was at the Monterey fairgrounds in 1967. (The summer of Love).  Not only is the recording of Jimi Hendrix live at the Monterey Pop Festival still a classic, but many guitarists still have the poster of Jimi burning his guitar on stage.  Jimi was the 2nd great Guitar Slinger to be celebrated.  At the time, there was nobody playing like Jimi.

In the late 60s, many solo artists would make attempts at playing guitar solos during their songs, but most of these artists were known more for the song and their vocals.  Johnny Rivers (Secret Agent man) comes to mind. They had guitar skills but were not known as guitarists.  Speaking of Johnny’s; in the late 60s and early 70s a phenomenal Guitar Slinger from Waco Texas would surface as one of America’s best Guitarists.  Johnny Winter had a Rock and Roll voice and was a Guitarist’s Guitarist. 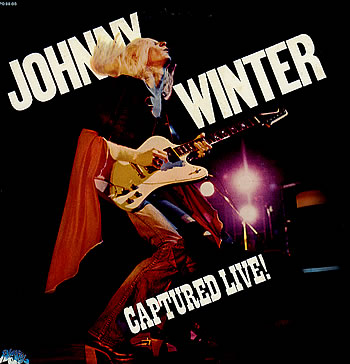 Although Johnny wrote little original music, he made a living off of recycling Rolling Stone hits. (A band that made a living off of Robert Johnson songs.) Whenever there would be a “Night of the Guitars”.  Johnny Winter would always end up making others turn their volume knobs down.  Nobody played like Johnny Winter.  There is a session recording of Johnny and Jimi before Jimi died out there in bootleg land.

In the late 70s, bands like Led Zepplin , Pink Floyd, and Aerosmyth would feature lead singers and carry a phenomenal guitarist as a side attraction.  (Jimmy Page, David Gilmour, Joe Perry) Then, many great guitaraists that couldn’t sing, would tour under their name, but would hire a lead singer to sing for them. Examples include Robin Trower, Ronnie Montrose and Van Halen.

The concept of the Guitar Slinger was carved out of Blues Music.  Gary Moore who spent a great deal of his career playing “Hard Rock” became a blues solo Guitar Slinger. B.B. King spent his whole career singing and playing blues.  His prowess appears to be divided along racial lines. I’ve found that his black audience loves his guitar playing while his white audience enjoys that deep blues voice.  I like them both.  Jeff Healy, a Canadian made a name for himself as one of the best “Shredding” Guitar Slingers.  He played better blind than most guitarist with the help of YouTube videos.

Finally the last great Guitar Slinger of worldwide fame was Stevie Ray Vaughan.  Stevie was just a kid from Texas playing along with Jimi Hendrix records.  Like so many talented Texas Guitar Slingers, the Stars aligned just right for Stevie, who decided to do the singing himself, and he was noticed by an English Artist named David Bowie who asked him to perform on his hit Album “Let’s Dance”.  Stevie died tragically in a helicopter accident after playing a blues concert in Wisconsin that featured several other Blues artists that included Buddy Guy, Eric Clapton, Jimmy Vaughan and BB King.

One thought on “The Guitar Slinger part 1 History”