This is a sad story that is only the beginning of an even sadder story which you can read about on line.  I will not get involved in the he said/She said accusations when greedy children and siblings fight over the estate of the dead.  That being said, let the story begin.

In the summer of 1993 my now ex-wife and I were “summering” in Carmel California.  (A town I would later and will always call home) But after having a posh taste of “scones and tea” we stepped inside a gallery owned by the world famous artist “Rosamond”.  The artist was not there at the time however her husband; Garth Benton was.   Garth (Pictured above) entertained us for over an hour as we talked about one of our unusual pets.  We owned a well trained iguana.

Little would either of us know that Garth would buy an iguana as a pet for their youngest child.  I would later find out that Rosamond would refer to this pet as the “Damn Iguana”.

On a later trip to Carmel by myself, I would purchase a piece by Rosamond for my soon to be ex.  When I went in to pick up the piece a few weeks later, Christine (whom she introduced herself to me as) greeted me with: “Oh so you’re the one with the Damn Iguana”.  After verbally abusing me for putting the idea in Garth’s head, we had a great discussion that seemed like it lasted two hours.  As an informal gesture of friendship, Christine personalized the back of the piece to the “Iguana Lady” and wrote some very nice well wishes.

Fast Forward about 5 months. The Ex and I got an Invitation to attend the new Gallery opening of Rosamond in Carmel.  Nobody was more excited than the ex as she had never met Christine.  And to be honest, I think Christine was looking forward to meeting the Iguana Lady.  So I rented a nice car for the drive to Carmel from the San Francisco Bay Area.  Hours before we were to leave to attend the party, the ex took the car to the store to buy something.  Upon returning, she misplaced the keys.  We looked everywhere and till this day they have not been found.  But because we both turned the house upside down looking for these keys, the Ex showed her immature emotional side and said: “I don’t want to go.  The moment is ruined”.  That is an exact quote. So we did not go.

3 weeks later Christine Rosamond died off the coast of Big Sur in the waters of the Pacific Ocean.  Apparently she was a victim of a rogue, freak 9th wave.   The Ex’s chances of ever meeting this great artist vanished with the 9th wave.

Not only was the moment ruined, but a chance to meet a wonderfully talented person forever was ruined due to an immature emotional tantrum to something as insignificant as losing a set of car keys. Please enjoy a few of “Rosamond’s” creations: 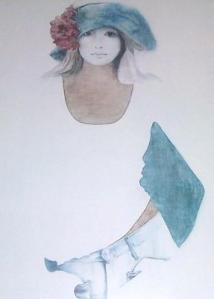 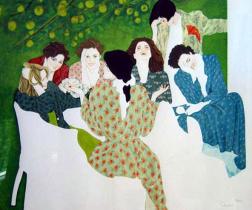 This is how I will remember Christine Rosamond.

Please note that all of the images in this blog entry can be purchased at The Rosamond Publishing Company http://rosamond.com/

2 thoughts on “Emotion lost to the Ocean”