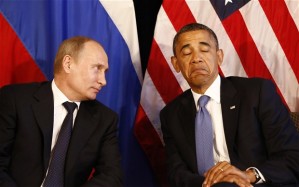 Vladimir Putin, who is acting more like Vlad the impaler;  Is invading other countries with impunity for colonial expansion.  Something Adolf Hitler did a year before invading Poland and officially starting WWII

All are turning a bind eye to Putin’s invasion.  Visions of 100 years ago are still vivid.

Still cleaning up the Fukushima power plant and living in denial.  Fukushima is not the only concern of Japan as China has built up an impressive Navy and is looking to conquer Japan’s Islands in the Pacific during Japan’s current  misfortune.

Pulls massive wool over the U.N.’s eyes with the help of the Russian Federation. After buying more time for their nuclear program, Iran has given Obama and the world the finger.  It works on an ICBM with Impunity.  This is a good indication they have the bomb.

Under the threats of Secretary of State John Kerry, President Assad bought more time, again with the help of Vlad the invader.  Syria has turned over 20% of it’s WMDs and given Obama the finger.  Assad continues to kill with impunity.

Prime minister Netanyahu sits with his finger on a button.

Al Qaeda, The Taliban and other misfits:  Sit and wait as Afghan’s leader Corzine robs the nation blind and flees. As will the U.S. boots leaving Afghanistan the same stone age country as it was only with more bath rooms and U.S. Blood on the ground.

The World as a whole is turning into a Fiery Tempest sphere.  While WWIII is being postured by Russia and China;

Obama enjoys vacations in Hawaii while it is still a U.S. territory and continues to gut and dismantle America as we knew it.  He recently submitted a budget that would make America defenseless against our aggressors.  He wants to cut troops and Naval vessels just as China with 2.2 million troops and the world’s largest Navy watch Russia invade a free standing nation, the Ukraine, while Obama continues the destruction of America’s health care system, immigration laws, the military, police and his major priority is to give away more cell phones to the ghetto.

And of course he needs to get more rounds of golf in.  One might think he would be taking up the violin..