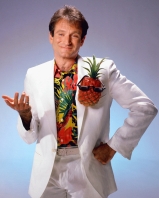 Being the Casablanca fan that I am, I wanted to remind the masses (The 1% of the smartest population that read my writings) That Lauren Bacall (Born Betty Joan Perske)  died as well on August 12th 2014.  Lauren Bacall was a teen model that was highly sought after in Hollywood.  Much to her unfairness, she is mostly known as Bacall, as in; Bogie and Bacall.  Lauren was what I describe as a “breezer”.  She was born beautiful and that in its’ self will open many doors for you. You will never have to ask someone for a date, just decide who to say yes to. 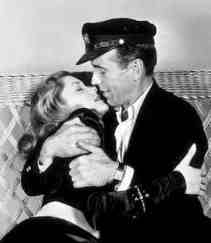 She was cast in the role of Humphrey Bogart’s leading lady in the 1944 film “To have and to have not”.  During the filming of the movie, Bogart who was in a miserable relationship with his third wife Mayo Methot, began seeing Lauren discreetly. If you read the last article on infidelity, you read that at the same time Bogart was filming with Lauren Bacall  (Who was 19 years old while Bogie was 44) Bogie was having an affair with Verita Thompson. 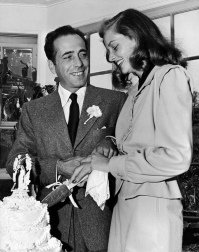 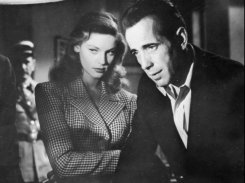 On a side note, the director of “To have and have not”. Howard Hawks, (also married) became quite fond of Ms. Bacall as well and was envious, even jealous of the Bogie/Bacall relationship.  He went so far as to threaten to send Bacall to Monogram which was the worst studio in Hollywood.  Eventually Jack Warner stepped in and settled things.  12 days after Bogie’s divorce to Maya Methot was final, Lauren Bacall and Humphrey Bogart were united in Holy Matrimony.  Bogie would continue his relationship/affair with Verita Thompson.

I never met Robin Williams but we had the same acting instructor.  Pat Lusk taught night classes in the San Francisco East Bay’s  “Chabot College” and also at “The College of Marin”.  Most of us knew of Robin long before his HBO special and long before he played Mork on the hit TV show “Mork and Mindy”.  I had seen Robin perform at the Warfield theater on a special bootleg video.  Robin was to comedy as Jimi Hendrix was to guitarists.  He changed the nature of the genre forever.  Nobody has come close to Robin’s raw talent and Nobody will for a long time.

Having seen Robin’s performance, one night when asked to do “Improvisation” I stole some of Robin Williams’ shtick.   My acting in instructor said after my outrageously destructive “Manic” act, “Mr. Andres, there is only one Robin Williams and he’s beat you to that performance”.   This is when she let on that Robin was a student of hers at the College of Marin.  I might add that she said that as talented as Robin was, he had a great dislike for Shakespeare.  In his HBO special which launched him worldwide, he mocks Shakespeare with a line where he says: “Look, the moon like a testicle hangs low in the sky”. 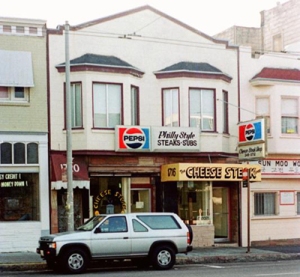 Robin use to enjoy the Philly Cheese Steak sandwiches at the original Bay Area “Philly Cheese steak Shop” On Divisadero Street in San Francisco.  The staff that worked there said Robin use to come in on Wednesdays and was just another guy.

I won’t go into the disappointment phase of Robin’s life.  You can read about his affair and his reaction to his first movie (Popeye) in the National Enquirer.  One observation that I will confirm is that Robin was openly accused (in the bay area) as being addicted to Cocaine.  This came as no surprise to anyone who ever saw Robin either acting or on the sidewalk.  Making people laugh just came natural to Robin. 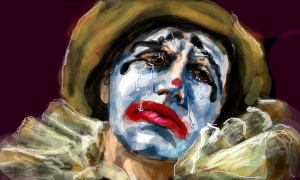 Robin was a 21st century Pagliacci.  Pagliacci was an Opera that premiered in 1892 and was the inspiration for Smoky Robinson’s “The Tears of a Clown” I apologize if this analogy is being overused.

I’ll keep my thoughts on the subject brief as I am not a Psychiatrist and if anyone is reading this is considering the topic, please talk to someone.  Do not feel embarrassed.  A poll was taken of Suicide survivors and over 90% of them said that once they had “Jumped” or “ingested the overdose” they realized that the problems they faced were all fixable.  I don’t know what that means, so take it for what it’s worth.

I will not judge those who attempt suicide.  It’s like a black man telling a white affluent man that he can’t talk about what life in the ghetto is like.  Until you’ve been on the verge of wanting to end your life, you are not qualified to judge others.  When I heard Shepherd Smith remark that Robin Williams’ suicide was an act of a coward, it made me quite angry.  This is a definition of Suicide that you can take to the bank:

“Suicide is a result of life’s demands outweighing one’s ability to COPE with them”.

All of us deal with stress and depression by using some form of a “coping mechanism”.  Some use alcohol, others drugs, others sex, many television and some just sleep.  When I was 16, my mother had died 5 years earlier.  I was different from the other kids in school that had moms that made their lunch and went to PTA meetings and helped them with their homework.  Living with my father was like living with a stock broker that couldn’t be disturbed.  He and I had almost nothing in common except baseball.  I use to engage in Television as my coping mechanism.

One of my favorite TV Shows in 1971 was a Western called “Alias Smith and Jones”.  It was about two former Bank Robbers trying to go straight.  The main actors were Ben Murphy (Jones) and Peter Duel (Smith) On December 31st 1971, Peter Duel was found dead as a result of gunshot wound to the head.  It was determined to be a self-inflicted wound as Duel’s girlfriend saw him take his gun from the Bedroom and later was awakened by the gun shots.  I was shaken by this.  Having lost my mother (and the rest of my family which went their separate ways) I began to think if ending my life was a possible answer to my misery.

I was lucky to have a friend in High School that I ate lunch with every day and I was asking him questions about suicide.  One day he said to me: “You’re not considering suicide are you”? And I stuttered in shame and said: “Oh no, I’m just thinking about Peter Duel’s death”.   There would be other times when the thought crossed my mind, but I guess my attitude was one of apathy.  It’s funny because in his special, “The making of a dummy” ventriloquist Jeff Dunham mentions the same line I told my counselor.  I wouldn’t kill myself (Too many unintended consequences) but if I was in a plane that crashed or was diagnosed with a terminal illness ~ Oh well……

My advice to those contemplating suicide would be this.  Life may suck now, but sometimes, and for reasons you can’t explain, life changes.  It’s like sitting in a baseball stadium and out of 40,000 fans, a foul ball comes to your box seat.  You don’t know why it came to you out of 40,000 seats.  In life; Good things and bad things happen.  Bad things happen to really good people and often, those who deserve prison end up winning law suits or the lottery.  Life is not fair.  But when you decide to end your own life, you eliminate the chances of something really good coming your way.  Why would you want to do that?

We’re only here on this spinning blue ball for a very short time (relatively speaking).  Go with it and see what happens.  Plus who’s to say that suicide is guaranteed to cut your chains of bondage?

“Go through life EXPECTING good things to happen to you”.

One thought on “Bacall, Robin and Suicide”