It’s the secret to life. I direct this advice to those of you who have BIG DREAMS.  One person’s big dream is another persons obligation.  The problem with dreams are that they come with a certain degree of uncertainty.  If they were simply things on your to-do list, they would not be a dream. I would love to perform as The Rolling Stones’ guitarist.  I know that whoever is playing for Jagger and Company now, would love to enjoy an evening off.   Yet their fans pay 3 digits to see Keith Richards and Ron Wood.  Not Ace Andres and Ron Wood. So to me it’s a Dream.  To Ron Wood, it would be nice to have a peaceful evening to throw paint on a canvas and sip a Merlot.

On the other hand, If I really wanted to play for the Stones for one night; I’m sure if I started following the band around and got to know all of the hitters, it would be just a matter of time before they used me as an opener, then I would get my chance like Spike Edney did with Queen.  Of course it helped that Spike played Keyboards as well but the point is, Spike was the covert 5th member of Queen.

I do believe that a life without Dreams is a Life not worth living.  I think each of us are here to do the incredible in their own way. (Be the best versions of ourselves) Einstein said: “The ability to dream is more important than knowledge”.  We’re not here to escape the demands of life by using drugs and alcohol.  We’re here to try to make this a better place, not just for us and our children, but for the following generations.  I fear that peace and promise for future generations will not come without a reset.  (And soon)

When I was a child, I wanted to be a Major League Baseball player.  What I didn’t know was that what was stopping my growth as a ballplayer was my poor vision.  I never got glasses until I was a freshman in highschool.  When I did get my vision corrected, I had a lot of catching up to do.  I could finally see the chalk board in school.  But the first time my heart was really shattered was when I was trying out for “American Legion” Baseball.  I made every practice and I even worked out in 114 degree weather (farenheit).  I wanted to play Baseball at any cost.  When I got the phone call that I was cut, I was crushed.  Later in the season, the team was out of contention so the gifted players started slacking off and going to Disneyland.  I got a call from the same coach that cut me and asked me if I wanted to “suit up” for the last game of the season.  I said sure.  I got to play in a minor league stadium (The Milwaukee Brewers’ system) and I got a hit that drove in the baserunner on third and I recall rounding third and scoring on a double after I had advanced to second base on a bunt.

So I never got to play in Candlestick park or the Oakland Coliseum, but I got to play in a minor league stadium.  Am I a failure because I didn’t make it to the show? Lots of really talented players don’t make it to the Majors (The show).  But I got a taste of the system and a fond memory.  In the end, isn’t that all we take with us? (BTW I could do another blog on the reasons our Dreams don’t come to fruition)

I was reading Ecclesiastes to my wife about a month ago.  I had explained how King Solomon was the richest man to ever live. (Even by Donald Trump’s standards) One verse that has stuck with me was chapter 6 verse 9 “It is useless; it is like chasing the wind. It is better to be satisfied with what you have than to be always wanting something else”.

I agree with the prophet.  I stand by my saying that a life without dreams is not worth living.  Why breathe? The secret to life lays in being satisfied with what you’ve been blessed with than to constantly want that which you don’t have.

Worrying about what you don’t have is not the same as wanting to better yourself.  That can come from reading a book or taking in a lecture.  It can also come from wanting the attire of the profession you’re trying to enter.  I would have no problem fitting in with the Ramones. (or Marky’s band) but if I had an offer from Johnson & Johnson as a Marketing Director, I would have to drag out the old Italian shoes, (Farragamo) and see if my pinstripe suits still fit, then cut my hair just for the interview.  Fortunately that will not be showing up on the Dream Radar anytime soon.  It never was a dream.  It was on the “To Do” list.

At this point in my life: “It would be nice to do one swan song tour with David Bowie or Rod”.  What ever your dream is, keep it alive. 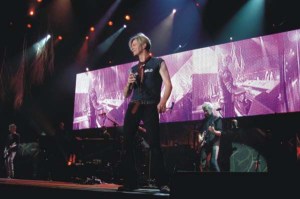 One thing I failed to confess was that the only thing better than watching your dreams come true are making someone elses Dreams come true.

5 thoughts on “A DREAM GOES ON FOREVER”