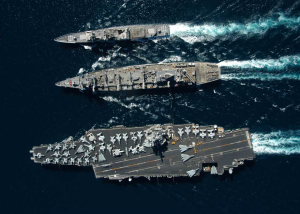 My brother served on the bottom 2 ships

I served on the small “Tin Can”

I haven’t written for a while because my brother died unexpectedly exactly a month ago today.  I was estranged from my brother for 6 years as was his son.  My closest sibling wasn’t a very nice guy.  He wasn’t a bad guy or a villain; he just had his demons which kept him from living in a sane state of consciousness.  (Translated- He believed his own lies).  He and his selfishness were responsible for more than a few ruined lives.  When confronted about his ex-wife’s suicide he responded: “I’m sorry for your loss”.  The only thing missing was the form letter.

I’m heading down a road that took me a month to avoid.  I didn’t want to write a hit piece on my brother or anyone who is dead and cannot defend themselves’.  I’ve spent the month trying to remember times when we were brothers.  I can’t seem to find any truly good times.  I’ve known about my brother’s demons since I was 15.  I overheard a blatant lie and it puzzled me.  Not wanting to create confrontation, I let it go, but I knew from that point on that something was wrong with this person. He’s the only person I’ve ever known that was living in their own separate world.  Sadly/joyfully, he brought another human into this world.  In spite of his father’s demons, his son persevered and is making the best of a less than perfect situation.

Before I forget, let me say that my brother enlisted in the U.S. Navy in 1968.  He spent the next 20 years or so climbing his way up the enlisted ladder.  I joined in 1973 out of necessity. At one point in our relationship, his ship (a Cruiser) was tied up next to my ship (a Destroyer). There was a time when I had to cross his ship to get to my ship. I asked the quartermaster on his ship to call my brother to the quarterdeck.  That was a snapshot in time when I felt like I actually had a brother.  We sat in front of the bridge and had a “smoke”.  Actually he smoked while I sat and watched.  I was a doc and tried to set a good example for my fellow crewmen. (I always hated cigarette smoke)  But that was one memorable time.  But while speaking to a fellow Vietnam Vet yesterday; something dawned on me.  My brother served our country for over two decades. How he made it to the top rung of the ladder I’ll never know.  Perhaps life without the military was too much for him to handle.  Perhaps some people need constant discipline to keep them on track.  Once he left the Navy, the wheels came off the track. I can say without reservation that giving your country 20 years of your life is a Noble sacrifice.

When I was awakened 30 days ago and informed of my brother’s death; I said: “Oh really”? (There was a different crisis going on and my brother’s death came without warning). Then I went back to sleep.  I hadn’t spoken to my brother in over a decade.  I hadn’t communicated with him via cyberspace for over 6 years.  He had no problem with it nor did I.  You see I knew his secrets.  One thing people enjoy is avoiding those who know their secrets.  So I felt the grieving process would be minimal.  I tried to make it a formality but if you’ve lived with someone for 15 years and for a majority of that time you “Looked up to them”, you’re going to have some feelings that bond you to them.

I think over the course of the month, I went through the various stages of grief but in abstract ways.  In many ways, losing someone you really didn’t care a lot for is harder than losing someone you truly felt was a loved one. You can grieve, go through the pain and move on.  When someone dies that you felt was just using up oxygen on this planet, you’re haunted by Albert Einstein’s comment that: “Within each of us lies a genius”.

My life was changed by both the writings of Dr. Stephan R. Covey and meeting the man. After reading his first book, “The Seven Habits of Highly Effective People”, I had to run out and buy everything I could from the man.  If you ask me what my most memorable moment was with Dr. Covey I would say it was meeting him and thanking him for changing my life.  It was a meet and greet and I was in a long line so I quickly shook his hand and blurted out: “Thank you for changing my life”.  He had let go of my hand then said: “No! Wait”, he got up, took my hand and said: “No son, Thank you”.

Dr. Covey died in 2012.  For me the Mayan Calendar did stand still when I got the news.  I cried secretly to myself.  My eyes are watering up as I write this.  I knew my brother almost 60 years and went back to sleep.  When I heard of Dr. Covey’s death, I did something out of character; I had a drink.  I had quit drinking and the alcohol didn’t help.  Dr. Covey was still dead and still is. That was the last taste of alcohol I had back in July of 2012.

If you lose someone you were close to, allow yourself to feel the loss.  You may not cry a river, but if your eyes want to moisten somewhat, allow them to.  Should your behavior become erratic, understand that you have a “sub-conscious mind”.  It gets to take control every now and then.  Life is complicated.  We will never know all of the answers.

I do know that obstacles are the things we see when we take our eyes off the destination.  Don’t let grief become your focus.  Just recognize it and keep heading towards your destination in life.  Do not let yourself get hung up on whether or not you’ve suffered enough to move on.  We feel guilt for not suffering. Don’t!  When I contacted my nephew (my Brother’s son) who is now in his 30s, we both said we felt bad that we didn’t feel worse. The truth is, you will grieve as much as you are supposed to grieve. Keep your destination in mind and keep the rudders pointed in that direction.