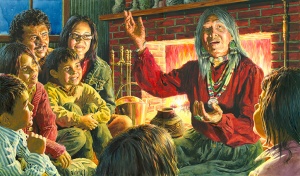 It wasn’t that long ago that Americans sat next to a fire and the Dad told stories to the family for entertainment.  If you were fortunate enough to have books, you could find a place all by yourself and escape from the chores of being a hunter or a gatherer.

In Europe, entertainment had a head start and the same jesters that entertained the king would try and make a little extra bread (Literally) entertaining the peasants.  Centuries before settlers were making a noise with their harmonicas and banjos, Mozart was writing his symphonies and Bach was writing waltzes.

If you want to go back 2000 years before the American settlers; Plato and Socrates were writing the most profound thoughts, concepts and ideas about life.  Meanwhile on the Yucatan Peninsula, the Mayans were creating star charts, pyramids and one heck of a calendar.

Yet, if you take all of the knowledge and entertainment up to the 20th century from Bach to Hendrix, it would be a fraction of the inventions and life changing devices that would come out of a place in the South San Francisco Bay called Silicon Valley.

Oddly enough, when technology came out of Mountain View California, it took several entertainment industries with it.  It changed the world and not entirely in a good way.  Every form of entertainment can be put into 5 gigabytes of memory on a phone, the thing that use to hang on your wall.  In the mid-1990s, record stores started going out of business.

About the same time, the price of a theater ticket went from $3.50 a show to almost $10.00 for a movie that would be on home video in 3 weeks.  Of course in 1980, cable TV was in almost every household showing movies that had been released 3 months earlier.  It also was the new venue for boxing events. 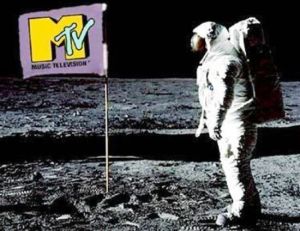 In 1980, Radio, (Both A.M. and F.M.) took big hits as “Music Television” (MTV) broadcasted music videos 24/7.  Radio no longer had the audience it once had as the video was more fun.  Unfortunately, as the Buggles sang in the very first MTV video broadcast: “Video killed the Radio Star”.  Now people could see what Joe Jackson looked like.  This was not necessarily a good thing either as some of the greatest writers and singers were really unpleasant to look at.  It also gave those who were blessed with good looks a chance to charm young fans in spite of their “auto-tune” voices.  It also raised the stakes of being a Rock Star.  You couldn’t just have a good song, good looks and you had to have a good video.  Many weak songs were driven by great video production.

Then 1985, 80% of the country owned a Video Cassette Recorder as the price dropped from  $700.00 for a crappy top loader, to about 250.00 for a new Sony front loader.  Soon Video Rental stores popped up.  You could stay home and make your own popcorn for 50 cents and buy a six pack of soft drinks for under 2.00 dollars.  Now that theater popcorn (with the yellow saturated 30 weight oil) and your big gulp will cost you about 12.00.  But you could now watch movies in your underwear and drink alcoholic beverages in the privacy of your own home.

Kids use to wait anxiously for the 3:30 bell in school to race home and grab their ball, bat and baseball hat.  A bunch of kids would meet at the park and play 3 flies up.  Or you would go over to your friends’ drive way and either play one on one hoops or “Around the world”.  If you didn’t have friends, you could go to the handball court and play tennis with yourself. (against the wall).  Kids got plenty of exercise before the machines.  Now they race home to see who’s on their favorite server to play a point and shoot video game.

Speaking of Sports, almost all of the sports took a big hit with modern technology from “Steroids” to the large Flat screen”.  It was recently discussed in a panel on television about being at the Super Bowl versus watching it on TV.  It was no contest.  Most of the panel enjoyed the modern television’s first down and line of scrimmage markers as well as inexpensive but better Nachos over sitting in the cold with 60,000 screaming drunks.

Personally, when it comes to baseball, I agree with Humphrey Bogart: “A Hot Dog at the Ball Park taste better than a steak at the Ritz”.  I might add, now days they cost about the same.  My only complaint is having 7 to 8 people touching my food before it gets to me.

Only one sport is not meant for TV.  That sport is Hockey.  It has nothing to do with the “ambience” but everything to do with camera angles.  You just can’t see what is “about” to happen while watching hockey on TV.  I will admit that replays of the goals are a nice touch and most if not all hockey venues have a replay screen. 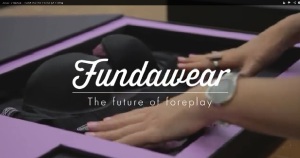 Now you can actually have virtual sex.  A company has created special underwear that enables your friend to call you on your phone and the phone will send a signal to sensors near the “Intimate” parts of your body causing a sexual response.  I think that says how far our culture has come and gone. (No pun intended) 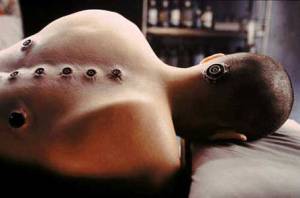 We are quickly heading towards a “Matrix” culture.  We no longer exercise our bodies or our imagination.  We care to much or not at all about our appearance.  Our “Profile Pic” has become more important than our wardrobe.

Personally, I think it will be most entertaining should an EMP (Electro-magnetic-pulse) explode in the atmosphere and everyone be forced back into the physical world and have to survive by hunting or gathering. (The Wild Wild West V.2)

Einstein once said: “Imagination is more important than knowledge”.   He was a smart guy.