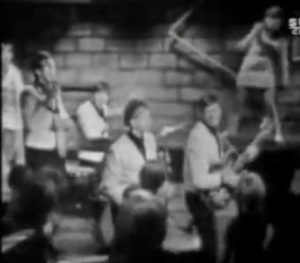 In 1956 Richard Berry wrote a song about a sailor who fell in love with a bar maid in Jamaica.  Being a lonely sailor out at sea wasn’t  exactly a song with an edge during the “birth of Rock and Roll”.

The song was kicked around by 3 to 4 bands on the west coast and North West but went “No where really fast”.  That is until 1963.  Under the worst of recording conditions, a band called the Kingsmen recorded what would be one of the greatest musical hoaxes of all time.  No not Milli Vanilli, in fact this Hoax was taken so seriously by that tyrant homosexual in Washington, “J. Edgar Hoover”, that the FBI spent tax payer dollars for 31 months trying to prove something that was just a bunch of prankster teenagers, “Punking” their parents.

The FBI could have been investigating the military industrial complex and the lobbyists from Bell, (Who made the parts to repair the UH-1 helicopter that sent thousands of young kids to their death at the hands of “Charlie”.  But instead, Just as “Paul is not Dead” and John Lennon did not say “I buried Paul” in Strawberry Fields, There wasn’t one dirty word in the1963 HIT SONG “LOUIE LOUIE“.

Teens in 1963 were just being rebellious teens and they floated a rumor that the song “Louie Louie” by the Kingsmen (Which had almost inaudible vocals) was a filthy song and the obscenities could be heard when you played the 45rpm at 33.3 rpms.  Mothers were outraged (which caused the sales of Louie Louie to sky rocket) and without interviewing the singer of the song or the writer, the FBI fed the song into audio analysis equipment like it was the Zapruder Film.  The F.B.I. spent 2.5 years trying to find a dirty word in Louie Louie.  So of course, bands that played high school proms would make up their own filthy lyrics and the myth became worse as it was publicized.  After 31 months, The official FBI report said: “They were unable to interpret any of the wording on the record”.  Ladies and Gentlemen I give the you the lyrics to Louie Louie

A fine little girl, she wait for me,
me catch a ship across the sea
I sailed the ship all alone
I never think I’ll make it home

Three nights and days we sailded the sea
me think of girl constantly
On the ship, I dream she there
I smell the rose in her hair

Me see Jamaica moon above
It won’t be long me see me love.
Me take her in my arms and then
I tell her I never leave again