We’ve managed to avoid being in the faces of China and Russia since Reagan left office, now it looks like Obama’s flexibility he spoke of to Medvedev. in 2012 is coming to fruition.  I’m presuming Obama has given Putin the green light to put the old Soviet Union back together again.

150,000 troops as well a Russian naval vessel,  are assembling in the Ukraine,  a country that wanted to join the E.U. but now has a former KGB agent’s boot on the country’s throat.  I’m seeing visions of Hitler marching into Austria.

Once again, this is happening at a time when Obama wants to “dismantle” our troops which is already tired and rated 9th in size compared to other war mongering nations such as North Korea, Russia, Vietnam and China.  Obama wants to cut our troops down to 420,000. 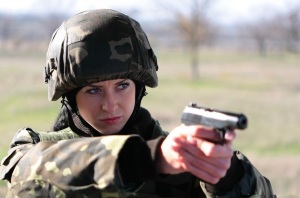 Under trained targets for the Russian Army

Does anyone remember Obama and Hillary dismantling the anti-missile shield in Belgium?

Must I remind everyone that Obama was born of Communist parents, he was raised in a communist school and was mentored by one of the FBI’s top watched Communists in the country; “Franklin Marshall Davis”  Communist party #47544.

AND HE REFUSED TO WEAR AN AMERICAN FLAG LAPEL PIN WHEN HE WAS A CANDIDATE.  WHEN DID HE EVER BECOME PATRIOTIC?

Is it a coincidence that Russia under it’s former KGB leader (that never acknowledged the break up of the old Soviet Union) is going to pull a real Hitler and take back all that was lost when the USSR fell apart?  Especially now that Obama has almost single handedly dealt America the same financial blow Reagan dealt Gorbachev?

I KNEW OBAMA WAS A WOLF IN THE HENHOUSE! POLAND AND GERMANY SHOULD BE ON HIGH ALERT!  AND DON’T EXPTECT HELP FROM THE USSA.