1. Saturday Night Live 1975 – It’s hard to believe that SNL has been on the small screen for 4 decades.  Next year will be SNL’s 40th anniversary.  Some say the show has been on 33 years too long.  This was the show everybody talked about on Monday morning.  This is the show that everyone tried to impersonate.  How many people do you know had their own impersonation of Guido Sarducci?   The original premise of SNL was to be a national venue for “Not ready for prime time players”.  Out of the original cast, all but 3 went on to become Giants in the entertainment industry.  After the third turn over in cast, the ensemble stopped working as a team.  Mike Myers and Dana Carvey were part of the last ensemble that worked as a team.  SNL will probably continue to produce mediocre comedy until someone puts it out of its’ misery.

M*A*S*H 1972 – MASH was produced on the coat tails of the Movie.  Strangely enough, it seemed MASH was better suited for Television than it was for the big screen.  The fans of the show are divided into three groups.  There are those who enjoyed the slap stick comedy version of MASH (Season 1-5), then there are those who enjoy the transformation of MASH into a more serious dramatic comedy. (Season 6-11) leaving the third group of those who enjoy all 11 seasons.  Personally, I felt the writing after the transformation was far superior to the unbelievable episodes with Klinger in drag.  The problem is; I don’t think those who have some kind of medical background can appreciate the writing of the post transformation.  The slap stick was replaced by Hawkeye’s morals and in some cases romance was used.  What was very special about MASH was that they knew when to call it quits and it was one of the most watched episodes in television history.

The Bob Newhart Show 1972 – I never watched Bob Newhart in the 70s.  I only recently watched the boxed set and I was pleasantly surprised.  Bob Newhart’s humor is wonderful.  The show ran for 6 years but they had a change in writers after the 4th season and the stories became stale.  But Newhart’s comedy comes close to that of Steve Martin’s in its’ sophistication.  The boxed set is a must own.

Welcome Back Kotter 1975 – Welcome back Kotter had a great theme song. (Written and sung by John B. Sebastion) The series had a simple premise about a cool high school teacher who had a“click”of students called the sweat hogs.  One sweat hog went on to become an international sensation. (John Travolta).  But Kotter was a show that everyone could relate to.  In many of the best shows on television, the key to success is how the characters relate to the public.  Kotter not only had a diverse group of students socially, but ethnically as well.  It only ran for four seasons but sometimes that’s enough.

Alias Smith and Jones 1971 – Starring Ben Murphy Pete Duel as two train robbers who decided to work for the governor to get pardoned for their crimes.  It was a western version of “It takes a thief”.  It was also one of the last modern day westerns.  The show ran for 3 years with great ratings but the actor Pete Duel struggled with depression and ended the series by committing suicide.  I recall this bothering me a lot as a young teen.  I still don’t think I’ve fully gotten over it.

Sanford and Son 1972 – Rarely does a great standup comedian transpose his comedy chops into great acting chops.  Look at Robin Williams.  It took Robin 10 years of acting before he became the fine actor that he turned into.  Red Fox (Whose real name is Fred Sanford) was consistently funny, so funny that he made it consistently hard for Demond Wilson to play the straight guy.  One wonders if Fred and Elizabeth are finally together.

Battlestar Galactica 1978 – I loved the Movie and of course I’m a sucker for women in tight space suits.  Why this series only lasted one season is beyond me.  Times were hard in 1978 and America was becoming more SELF aware and less Fictionally Aware. (Did I just create a new phrase)?  Galactica was released on the heels of Star Wars.  Perhaps there were copyright issues that eventually got settled as BSG would return 20 years later.  They changed the characters around.  Starbuck became a female. (and wow) but by then, the Sci-Fi audience for space shows was being consumed by the new Star Trek series “Voyager” which was the first Trek series to feature a female captain, and then the Prequel to Star Trek, “Enterprise”.   But for one year between 1978 and 1979 America was able to escape the depressing news of the 53 hostages in Tehran and double digit inflation. 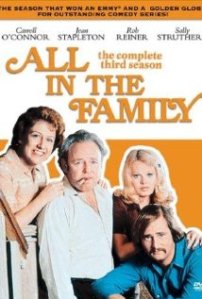 All in the Family  1971 – Perhaps one of the boldest Television shows ever, Archie Bunker, a New York cab driver was able to spew incredible racist and politically incorrect lines every week for nine years.  What was worse was America enjoyed it.  It was the personification of Free Speech.  It had to drive the ACLU crazy.  Archie Bunker was a Hero for the greatest generation.  Archie was that outspoken uncle that showed up at Christmas dinner.  Archie was a first Amendment American. 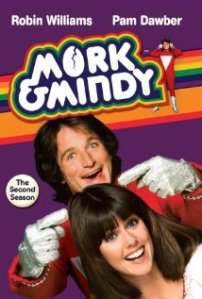 Mork and Mindy  1978 –  I took acting classes from Pat Lusk, who taught Robin Williams at the College of Marin and Tom Hanks at Chabot college.  Robin was born to do standup comedy.  His most successful films are where he is able to be himself and do standup.  His portrayal of Airman Adrian Cronauer in “Good Morning Vietnam” was Robin being Robin.  I watched Mork and Mindy because of Pam Dawber, who is related to Mark Harmon, the bother of the beautiful Kelly Harmon.

Kelly Harmon, was known as the “Tic-Tac” girl in the 70s and also played in one episode of Battlestar Galactica.  Wow.  There was a growing demand for Robin to expand his career to the silver screen.  Unfortunately, like Steve Martin, his first film “Popeye” was a flop.  At least Martin’s film “The Jerk” was written by and co-starred Carl Rhinert. (Meathead’s real father) But to quote Robin in one of his HBO specials: “Popeye wasn’t good for anyone”.

ACE’S SPECIAL SLEEPER – HART TO HART  Ok, I, like most baby boomer men, wanted to be RJ. (Robert Wagner) Why? Because he always got chicks like Stephanie Powers.  A woman I’m rumored to have had an affair with.  But I can assure you it is just a rumor. (I can neither confirm or deny).  How many shows in the 70s had a happily married couple that played detectives with matching 450SL Mercedes?  The show was one of my favorites.