My wife and I use to watch almost nothing but Law and Order and all of their spinoffs.  (SVU, Criminal Intent, Homicide; Life on the streets etc…) Then we discovered CSI.  We originally started watching CSI Miami as the “Horatio” character seemed intriguing.  Then CSI Miami turned into a Tits and Ass show and we discovered the real thing. CSI aka CSI Las Vegas.  This was truly a great “Who done it” show.  Unlike the NBC franchise Law and Order, CSI would give you more than a glimpse of the lives of the agents.

Dick Wolf, who produced Law and Order didn’t want the show to focus on the characters but wanted it to be story driven.  That was a great concept until NBC turned into the National-Bolshevik- Communist network.  We try hard not to watch NBC at all.  Anything associated with MSNBC soils my eyes.

CSI, in an attempt to compete with Law and Order, created CSI New York.  That sort of pushed us over the edge.  One thing that you noticed about the CSI franchise was that the individual shows had their own lighting scheme.  Yeah I know, it does seem strange.  You could literally see a CSI lab with nobody in it and tell which CSI show you were watching.  Miami was Orange (It gave it that beach sunset feeling) Las Vegas or the mother ship was Blue.  (Poker chips?) Then for some reason they gave New York the color grey.  It just never fit in with the Las Vegas and Miami show.

When Obama was elected in 2008, CBS committed self destruction.  They got rid of the two stars that carried the show and replaced them with Lawrence Fishburne.  Now I liked the character Morpheus, but in this case, they tried to fix something that wasn’t broken.  Just as Law and Order lost 2 million viewers when they felt they needed a blonde (Elisabeth Rohm) to compete with CSI’s blonde (Marg Hilgenburg).  CBS lost about 6 million viewers when they tried to get in good with Obama.

So with both franchises turning to shit, and television being taken over by reality TV; the channel of all Cop channels was launched.  Discovery Investigation or Discovery I.D. as you may find it on your cable channel.  We were first attracted to a show called “Homicide Hunter”.  It features a great retired Murder investigator named Joe Kenda.  He narrates the stories from an abandoned Jail house or an old Dusty Warehouse.  Joe is a great guy.  He’s the kind of guy that (when you were a kid) you would sit around on the living room floor while he sat in the recliner and told you stories about the bad guys he caught.  The reality is; Lt. Joe Kenda put away 387 murderers. Now a days, that’s 15 seasons.  (26 episodes a season)

This is a link to some behind the scene interviews with Lt. Joe

But what made me fall in love with Homicide Hunter is that they call them like Joe tells them.  Unlike Law and Order or CSI where all the bad guys are “Rich white guys”, the stories Lt. Joe tells, reflect the 52% of the prison population that come from the 12.9% of the country’s census.  Discovery I.D. doesn’t go out of their way to kiss Obama’s ass. 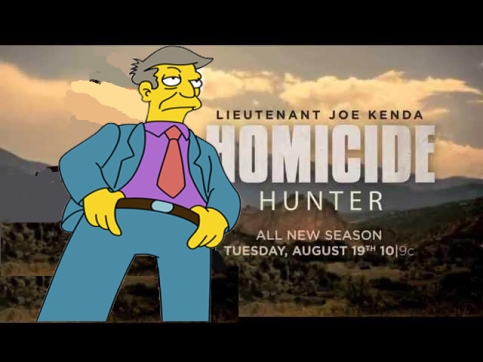 The rest of the shows on Discovery I.D. are also really interesting but they lack Uncle Joe. (Who in a way resembles Principal Skinner from the Simpsons)  Joe truly makes Homicide Hunter special.  In spite of the many low budget bloopers like a crime committed in 1982 with a gas sign saying 3.77 a gallon for gas or a 2010 silver Acura driving down the street when it’s supposed to be the 80s.  But they’re able to get away with it because as I said, when you were a kid and Uncle Joe was telling you a good story, two cars could have crashed down the street and you would be oblivious to it.

As for the other programming, Web of Lies is a great series about internet crimes such as internet dating gone wrong. Obsessions is about people that are, well, Obsessed with another person and will kill to keep them. Murder Book is more of a Hawaii 5-0 cop show with real people, I would go so far as to say all of the shows except “Who the bleep did I marry” are all very well done. The last show mentioned has the most obnoxious narrator that sounds like Martha Stewart on Quaaludes, the show is about people who rush into bad marriages.

Finally I have to flash back on the year 2007.  It was the year my injury made me take time off from work.  I use to watch a show that I believe is still on called the first 48.  Now my wife who grew up on Hill street blues and McMillan and Wife (Cop shows) had gotten me interested in cop shows.  So I would watch “The first 48” (48 hours after the crime) every day.  But since the stories were real, I started getting really depressed at how fucked up our society is.  (And even worse, the direction it’s heading). So I found another show called 24 that had me glued.  A few years later, I showed my wife one episode and we ended up buying all of the back seasons on DVD.  Jack Bauer had our attention anytime.  We have every episode, even the newest season which is not out on DVD yet called “Live another day”.  It’s on our DVR.

I only bring this up because although my wife loves watching the current shows on Discovery I.D. she’s asked me if I can put something positive/cheerful on before we go to sleep.  I think 3 hours of real hideous crime a night is actually getting her to the depressed point that I had gotten to.  So we usually end up watching the 3rd period of the Sharks Hockey game or an episode of some Psychic Medium like Kim Russo or Theresa Caputo.

f you like Who done its; You have to watch Homicide Hunter.  Lt. Joe Kenda is the greatest character real or fiction on the small screen.