The human lifespan is relatively short when you think about it.  I strongly believe that you chose the life you’re living. (You are what you is) When I look back at my time in the military (Several decades ago) I can say I left with an honorable discharge and the enlisted rating of a non-commissioned officer. Not bad for a kid that enlisted at the age of 17 and didn’t know what he was doing.  But I really wish I would have had some guidance.  Since I am what I is; I guess climbing the ladder of Success in the military wouldn’t guide me towards what I knew was my first love.  Music!  But the military gave me many hours of free time to practice scales and work on soloing techniques.

Yet had I been mentoring myself back then, I would have said to myself, why don’t you take the test for the next level?  I guess because all I wanted to do was create music and not become a higher paid member of the Armed forces.  I didn’t realize I could have done both.  I think subconsciously I thought by climbing that ladder, I would turn my back on my first love.

So I believe that before you sailed down the vaginal canal and had your umbilical cord ligated and severed; you said to the powers that be: “Sure I’ll take a shot at being born under these circumstances”.  Sounds like a bunch of crap doesn’t it?  Why on earth would anyone say: “Sure, I want to be born a Jew in Berlin around 1925”?  Perhaps we have limited choices. “Who knows”? Again, like I said yesterday, you are what you is.  There were many Jews that said in 1933: “See Ya.  I’m heading for America”.  I said that had I been born in the Sahara Desert, I would have moved to a new location where there was food.

It’s easy to say that now. (At my age)  Where was that vision when I was a lower paid non-commissioned officer?  It’s water somewhere miles from the bridge.  I wrote once that we are all living in the past. (Literally, once your brain interprets stimulus, the event has already come and gone) So we need to anticipate or “be in sync” with the future. Instead of using Stephen Covey’s formula of “Stimulus, space, response”.  We need to constantly put another space in front of the Stimulus part so that the space that does exist between Stimulus and response is smaller and we do not need to create our response based on an insufficient paradigm.  This “space” is what Stephen Covey called being “Pro-active”.  He made it the first principle of highly effective people.  Dr. Covey said: “#1, begin with the end in mind”.  Or as the “Tubes” called it, “The completion backwards Principle”

I’ll give you an example.  You’re walking through the parking lot late at night.  Do you read your text messages on your phone (laughing at a stupid video) or do you keep your keys in one hand and perhaps a foldable combat knife in your other hand while being aware of your potentially dangerous environment?

I’ll make it even easier.  When you go to bed do you just turn off the Television and say goodnight or do you do a walk through to make sure doors and windows are secured?

I’m not saying live in fear, I’m saying live in preparation.  Let’s go the other way.  I’ll use my own situation as the example.  If David Bowie called me and said: “Ace, I want you to fly to my studio in New York to audition for my touring band”.  Do I say sure and get all excited and tell all my friends that I’m going to tour with David Bowie or do I make a check list of all of things like new strings, transporting my gear, my appearance, learning every single David Bowie song I have access to (up to and including Queen’s under pressure) and getting the material I don’t have access to? 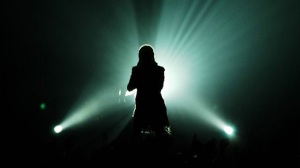 I can see myself shaking David’s hand and saying: “Where’s our first stop on the tour”?

Here is another key to being a successful human.

Did you ever see Johnny Carson do his act “The Amazing Carnac”?  Johnny would get questions from the audience (supposedly) and he would know the answer before he opened the envelope.

There are people in life that are so willing to finish your sentence for you because they want to impress you with their knowledge.  It’s RUDE and ANNOYING!  NEVER finish someone else’s sentence unless they say something like, I can’t remember their name, or help me out here.  When you know you are going to meet someone important, someone you might want to work with; study everything you can find about them. THEN, in conversation, act natural.  Nobody likes name droppers and certainly nobody cares to have their thunder stolen. Here’s another secret: “Nobody wants someone they know they can have”.  So don’t show any form of worship.  (That comes from the Ten Commandments. #1.  It’s more than just a commandment.  It’s great advice)

You can make your human experience so much more dynamic and enjoyable by using spiritual principles.  These principles are not rules or regulations.  They’re like the wind.  You can’t see them, but if you set your sails accordingly, you can use them to navigate (sometimes quickly).  And like all principles, it doesn’t matter if you believe in them or not.  They exist regardless.  Try not believing in Gravity.  Dr. Stephen Covey wrote that he believed that God was responsible for these principles.  It’s not a religion, they’re in all religions.

I would encourage that young 17 year old version of myself to read and try to understand the spiritual advice that is available to him with an open mind.  In fact I did and it gave me the perimeters of right and wrong.  It kept me out of jail.  But nobody ever gave me guidance on setting achievable goals.  But then perhaps life is not about “greatness” but simply “being the best version of yourself”.