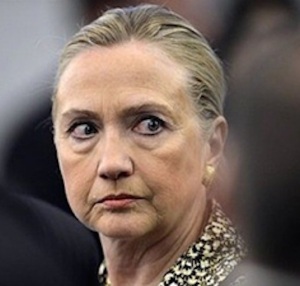 How do I really feel about Hillary?

I really feel that Obama hates police of any fashion and would rather spend the next 4 months in Martha’s vineyard playing golf and Hillary is her own favorite vegitable. She wouldn’t know the truth if it gave her husband a blow job. She has no morals or mores and will put up with her womanizing husband just for her own hubris. In all honesty her husband was a better president than Bush 43 & 41. But now that he’s not accountable, life is one big testosterone shot for the guy who’s gotten old and gray. I feel Trump is either the best thing to happen to America or the 2nd worst. (Obama with the help of George Soros without a doubt has done more to destroy America than anyone. At least Bubba balanced the budget (with the help of the 101st congress, you know, Newt Gengritch et al?) And he did make wealfare recipients accountable.

But even bubba let Osama Bin Laden go. He also signed into law the affordable housing act. Which lead to the 2008 crash once the greed generation got on wall street. As for Monica Lewinski? I really don’t care, but seriously; Is that the best he could do? At least the Kennedys had class. You can’t compare Norma Jean to Monica.

I think it takes an incredible amount of hubris to run for president. Hillary is running because she thinks she’ll get Bubba’s votes. Can you imagine the hubris it takes for both spouses to think they can run the country? But most voters were in grade school when William Jefferson weasiled his way into the White House like Bush 43. Only Bubba had the largest minority vote. (Not ethnic) All three candidates got less than 50% of the vote. THAT MINORITY.

In this situation, we know more about Donald than we did Buckwheat. He only got elected because the Bilderberg’s wanted him elected. America is the final trophy for the Bilderbergs. So far we’ve avoided the war the Bilderbergs had anticipated. The Bilderbergs have been running the country since Eisenhower left office. (With a short break when Reagan took office in the 80s which was the longest AND most prosperous peace time presicency ever.) And Reagan was shot….hmmmmm!

Bush 41 was the first to openly say: “New World Order”. (Global communism). Bubba signed not only the affordable housing act, BUT N.A.F.T.A. Which brought the rise of Walmart and the fall of mom and pop stores. (Taking the middle class American dream with them). In Bush’s last term he destroyed Detroit and Pittsburgh with regulations. (A Bilderberg move) as for Buckwheat; just look at our GDP for the last 7.8 years. The first thing the Buckwheat administration did in 2008 was to move the census bureau into the White House. (Giving him control of the nation’s demographics.) In other words, the position to manipulate economical reports. His unemployment rates are a hoax. The Fed considers you employed if you’re not filing unemployment claims. (Not taking into consideration those who are living in mom’s basement and can’t get unemployment anymore). So what the unemployment rate really represents are those filing unemployment claims divided by 330M. Not those who are unemployed. The real unemployment rate is somewhere between 15% and 20%.

Not to mention the under employed rate. (The result of Buckwheat care.) How many 40 hours jobs are now 29 hour work weeks? The final economic death nail in the coffin will come if this stupid $15.00/hour (for flipping burgers) min wage isn’t repealled. Teens will be stealing gas or gas money while college grads will be forced to flip burgers. See how far you’ll get with a liberal arts degree if you can make what a plumber makes by picking up trash. Instead of 2 teens getting employment and experience at 7.50/hour, one person who probably use to input data will now work twice as hard with “Robotic” burger flippers.

$15.00 an hour will put us on the road to singularity. (dependence on machines and computers). What used to take 4 big GM employees to put in a wind shield now takes one 104 pound female and a hydraulic arm. Sadly, I believe Obama has ruined us beyond kicking the can down the road. By creating the Federal Reserve Bank after WWI in 1919, and even worse, taking us off the Gold Standard in 1973; it put us in a situation where if the U.S. Dollar was the world’s reserve currency, and it was no longer based on the amount of Gold and Silver a country possessed; the only way we had to create wealth was by debt. Why do you think Buckwheat doubled the national debt in 8 years? He did in 8 years what 43 presidents wouldn’t do in 232 years. The scarey part is that Russia and China know that we have an idiot for a president. So China has been buying up Gold like it’s free. Are you getting the picture?

With China and Russia sharing the same Ideology and America raising spoonfed 30 year olds in momma’s basement use to getting $15.00 “Fiat” dollars an hour for wearing a hairnet and asking if you want fries with your 9 dollar big mac, what condition will the U.S. be in should their be a communist/Islamic invation? The only way for America to return to its glory days of the late 40s and 60s is for the big 3 to destroy one another. America defaults on its debt and manufacturing is brought back to what’s left of a nuclear ruined America and we go back to gold back currency, not fiat currency.

That’s what happens when you let 9 rich people in 1919 create a bank and call it “Federal Reserve” no different from “Federal Express”. Then make it illegal to own gold (Nixon in 73). It would have worked fine until we got megalomaniacs in power with a “ghetto mentality”. (“Hell we be Rich”)

You’re right Mr. Franklyn. Thank you for the republic you and our founding fathers gave us, but as you allured to; we couldn’t keep it.