HOW DID WE GET FROM THIS

They say that the 60’s represented the death of Innocence. That makes me sad. As much as we discovered our sexuality, wouldn’t it had been more fun to examine it in private? Now 3rd grade girls dress like prostitutes. They play with dolls that look like prostitutes and a virgin in junior high is almost unheard of. Now they get to see Disney’s Hannah Montana presenting her vagina in a dance called “twerking” How have we benefitted from this?

Rape and other Sex Crimes in the northwest grew by 1000 percent between 1998 and 2000. It surged from 150 to 15,000. Is this because boys don’t know the limits of the sexual revolution? Teenage pregnancies in the 50’s were almost unheard of. Abortions were only done to save the mother.  Not because the female sex partner chose not to be a mother.  Something as awful as killing an unborn fetus (Some we use to cherish) is now “simply having it taken care of”.  The 60s never brought us a sexual revolution, it brought us moral destruction.  It was only a revolution from dignified mores. (Look it up) 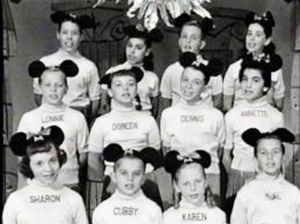 I was just a toddler in the 50s. I grew up on the Mickey Mouse Club in Black and White. In the 60s, Every Tuesday night at 7:30 I was glued to ABC for Vic Morrow and Rick Jason in a patriotic TV Show called Combat! Hollywood had no gripes producing this show because the greatest gift Hitler gave Hollywood was being WHITE. Other WWII TV Series existed on the small tube, but if the enemy was not Caucasian, it had to be a comedy like McHale’s Navy or Gomer Pyle. I use to enjoy old Ronald Reagan/Doris Day movies where you could get a woody from a romantic Raquel Welch kiss. Now it seems producers aren’t happy unless there is some form of asphyxiaton involved with brutal sex. Sex, not Love.

The greatest tragedy is that not only did the Bill Ayers and Jane Fondas rob us of our innocence; they robbed America’s future generations of their innocence as well.