“We are just five days away from the fundamental transformation of the United States”.   Barack Obama

“The proletariat is the undertaker of Capitalism“. ~ Nikita Khrushchev,  August 24th  1963 address to the west in Yugoslavia:

The take down of the United States of America would not be the same as September 1939 in Poland.  There are 3 major ways  you can take over a country.  Let’s (for the sake of example) use Canada.  Let’s say Obama wanted to invade our friendly neighbors to the north.  A conventional attack would probably accomplish it in a relatively short period of time.  (Months)?

We could use conventional warfare.  Flood the zone with drones then occupy.  This would not be very hard.

We could threaten to annihilate the population of Canada and broker a take over like Hitler in Austria/the Sudetenland.

We could Hit their defense depots with strategic nuclear arms, then occupy.  But the radiation would make the productive parts of the country uninhabitable and the fall out would contaminate our country.

Or, we could run a charismatic candidate in the Canadian elections that would bring Canada to its’ knees financially and it would have to seek a deal with the U.S. to protect its’ interests from Russia and China.  This would be conquering Canada from within.  This is what is happening under the guise as the “Fundamental Transformation of the United States of America”.  The only thing protecting us is not the constitution per se, but the conditions the constitution has provided us.  The second Amendment.  And hopefully, the military would not turn on its’ own citizens.  Why do you think this administration and every Democrat wants to get rid of the individual’s guns?

Obama and his communist father’s dreams can not be accomplished by the first 4 methods.  I doubt the military would enforce a non-constitutional confiscation of weapons from law abiding citizens. (Nation wide)  So to set up a scenario where this can be somewhat accomplished, he needs “civil unrest”.  Ever since this Manchurian has been in the white house, he’s constantly been poking “Whitey” in the eye.  During the government shut down, he invites immigrants to protest and shit on the D.C. Mall while spending more money to keep true heroes of WWII from visiting their monument which many of their buddies died for.  We can easily see who’s side Obama is on.

He nominates an attorney who got a cop killer off of death row to work in the D.O.J. when there are thousands of qualified “clean” attorneys to select from. He picks a major campaign supporter to investigate campaign corruption. He blatantly lies to America about the death of our Ambassador in Benghazi.  In doing so, he runs the U.N. Ambassador Susan Rice out on a Sunday morning to do five talk shows to spread the lie, then promotes her to National Security Advisor. 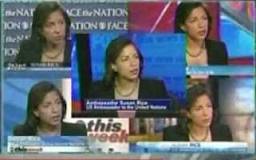 After General Petraeus  resigns, he nominates two Doves with hardly a spec of military experience to be secretary of defense. Leon  Panetta, who was known for his achievements in agriculture and civil rights was a 2nd Lieutenant in the Army after two years of service and the current Yayhoo Chuck Hagel was a Sergeant in the Army who also spent two years on active duty.  In the meantime we have brilliant Generals and Admirals who graduated from West Point and Annapolis doing nothing.

He cuts back on the military budget so far that we have more Admirals than we have Navy Ships.  He has made us vulnerable to a Chinese/Russian attack.  Poka Poka Poka…….

We’ve seen blatant racism in the oval office starting on the first day when our less than dignified Attorney General dropped charges of voter intimidation against members of the Black Panther party for Voter Intimidation. (Which had been filed under the Bush Administration).

This would be the same attorney that negotiated the pardon of the egregious felon Mark Rich by former President Bill Clinton who was serving time for 65 counts of Tax evasion and Ponzi schemes.  This is the same Attorney general that was given executive privilege when asked to testify in front of congress for his role in the fast and furious gun running scheme that sent thousands of weapons to the drug cartels in Mexico which resulted in the death of border patrol officer Brian Terry.

He is doing every thing he can think of to incite civil unrest in our nation.

This would give him the probable cause he would need to turn the national guard on the American public.  With the Reds fighting the Blues, rule of law would be an after thought.  This would make the U.S. truly vulnerable to a Communist attack, thus fulfilling Khrushchev’s prophecy and Obama’s father’s dream.  He’s got three more years to accomplish it.  His administration is one you would find in a banana republic and he’s shown that he’s not afraid to use executive orders.

If there is an uncivil war in our country; let’s hope and pray that the last man standing is a constitutional patriot.