HAVE THE DEMOCRATS COVERTLY INFILTRATED 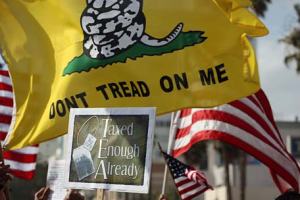 Has the tea party become a tool of the LEFT?  The concept of a “Tea Party” was never one built on being a political power; but rather one of conservative principles.  It was never supposed to be a voting constituency.

It was a bunch of people with flags and lawn chairs that had one issue in common.  They were opposed to excessive Government spending.  The Media had no Idea how to handle this.  So they fell back on typical liberal media practices.  They demonized middle class America.  Then once this “Movement” gained traction future politicians attempted to champion this group of discontents.  Enter Sarah Palin et al.

In typical communist fashion, there were those who decided to put thoughts of grandeur into the minds of certain leaders of this movement. (Which there were not supposed to be)  Just as Communist China divided the United States during the Vietnam War, the “Tea Party” has been infiltrated in an attempt to divide the Republican Party.

Those of you in the Tea Party know that the T-Party is a movement, not a political party.  It was started as a conservative movement.  There is no T-party Caucus.  Sure some candidates were elected who were championed by those of the movement.  Then there was money to be made by those who attempted to champion the Tea Party and even worse, they have attempted to manipulate the conservative vote.  The use of name calling (RINO) is very indicative of the Left.  Which leads me to believe that the movement was infiltrated and used to divide the Republican Party

Just remember, The Tea Party is a movement.  A divided house cannot stand