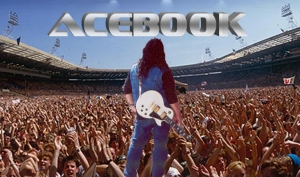 “A life without dreams is not worth living” ~ Ace Andres

I’ve told this story before.  When I was six years old in first grade, we all had to stand up and declare our future occupations.  Actually it was more of a dream sharing period.  The girls all got up and said: “I’m going to be a nurse”.  The boys all stood up and said, they wanted to be policemen, firemen, Astronauts, football players, baseball players, basketball players, sailors or Soldiers and one kid wanted to be like Elvis.  (Guess who)

But there was never any hesitation about what kids wanted to be. I can’t imagine what kids want to be today.  What are their dreams?  A majority of kids don’t get out of the house so they don’t know what it’s like to play catch, one on one basketball or tackle football in the middle of the street. They have to be blessed with great eye/thumb coordination.  That’s about it.  They live for the most part in a virtual world.  This irony was eloquently exposed on an episode of Duck Dynasty when the father tries to take the grandkids fishing and he asks if any of them have been fishing and one granddaughter replies: “I have a fishing video game”.

The T.V. programming in today’s society emphasizes one thing.  Be rich, however; It’s more of a “Lotto” mentality.  It has little to do with virtue, hard work or using your brain,  but it’s all about “Dat Green”.  Some kids want to be rappers as they see talentless entertainers who can’t even write or pronounce the words they’re trying to say, wearing gold chains (bling) and exploiting women as sex objects.  I don’t think kids seek vocations with virtue anymore.  Social status is an evil concept in today’s society.  (It’s great however; if your dad is a doctor and you can live at home in your parents “cottage).

We’ve done a pretty good job of destroying dreams.  The “Cool” kids do drugs and hate cops.  Firemen die for other people….yuk. Playing sports means leaving your X-box and bag of Cheetos. Obama thinks war is bad so forget about the military and being a potential amputee.  The Term “Rock Star” is antiquated and only refers to “popularity” as there are no more rock stars just as the age of Rock music died……… “I just don’t know anymore”.  I do know that kids are being more polarized.  There are those who can read HTML and those who don’t know how to turn on a PC.  It has nothing to do with inequality of opportunity.  It has everything to do with inequality of work ethics.

I truly hope the future of our kids is not Jason the Food Stamp surfer and the “Rat’s life”.  But I see little hope of society turning this trend around in the next 3 years.